Immediately after taking heroin just feeling euphoric. Feels kind of emancipation, people easily in contact with others, sometimes increased libido (sexual desire, desire). In rare cases, the primary effect of the drug may be followed by oral dryness, itching and vomiting. However, such a state of non-durable. After a burst of “high” drug addict for a while in a state of apathy. Breathing slows, the heart begins to beat less often.

When the effect of heroin eventually comes to an end, the body needs the addict to drugs. If heroin dose is not approved in time starts breaking, which lasts until the next administration. During the break-up with someone it is something horrible: aching bones, there is diarrhea and vomiting reflex, there is a feeling of anxiety, mental faculties blunted. Another symptom of intoxication from heroin – constricted pupils, who do not react to light. To identify the drug before testing for drugs that show, including heroin, the police and doctors often use a small flashlight that shines in the eyes, watching the reaction of the pupil.

The well-known, but little wonderful writer from America, William Burroughs, the author of a literary work, “Addict”, while writing the novel use of materials collected from their own experience. Having experienced the effect of drug, he writes that heroin has primarily “on the legs back,” after – “behind the neck”, from which poured “a wave of relaxation”, a feeling that you’re “blur” appears the feeling that the person is dissolved in warm water.

Such lightning effects of heroin on the central nervous system caused by the fact that it easily penetrates the drug. Nature took care of the human brain, protecting it spetsbarerom, which limits access to the nerve cells of all kinds of chemical substances. However, the special structure of the heroin drug molecule gives the opportunity to seep through the barrier and accumulate in the brain, to penetrate into the nerve cells, causing an overabundance of excitement.

Long-term use of heroin devastating effect on the entire body. If it is administered intravenously, the vein creating sclerosis, blood vessels become clogged. Also on the background of frequent heroin may develop arthritis or tuberculosis.

When using a single syringe at all possible to catch infections when administered to opiate drugs, which are transmitted through the blood, including HIV and hepatitis C.

Another distinctive feature of heroin is that it does not cause the development of a particular disease, but greatly depletes the entire body and nervous system ages, because the cells simply die prematurely.

Heroin is accumulated not only in the brain but also in other organs. He slowly poisoning them. This is evident from the frequent discomforts gag reflex and head pain. Those who consume the drug periods, pain in the stomach, diarrhea starts, lost appetite and muscle cramps occur. Almost all addicts weakens the immune system, so they often take cold, and suffer various diseases. 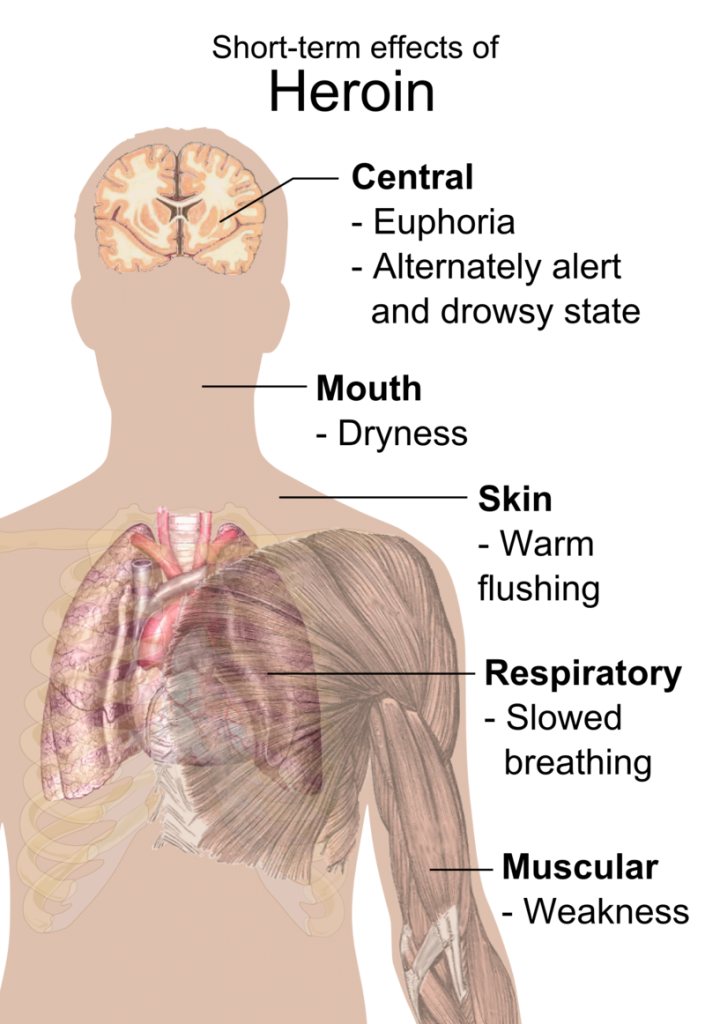 Short term effects of heroin. The action of heroin.

Smoking of Opium - Terrible Consequences
What is heroin and heroin addiction
How does amphetamine?
Synthetic marijuana is a drug
Psychological and physical dependence of cocaine
Physical and Psychological Effects of DXM