The history of the opium drug

Cultivation of opium poppies for food, anaesthetics, and ritual purposes dates back to at least the Neolithic Age (new stone age). The Sumerian, Assyrian, Egyptian, Indian, Minoan, Greek, Roman, Persian and Arab Empires all made widespread use of opium, which was the most potent form of pain relief then available, allowing ancient surgeons to perform prolonged surgical procedures. Opium is mentioned in the most important medical texts of the ancient world, including the Ebers Papyrus and the writings of Dioscorides, Galen, and Avicenna. Widespread medical use of unprocessed opium continued through the American Civil War before giving way to morphine and its successors, which could be injected at a precisely controlled dosage.

In China, recreational use began in the 15th century, but was limited by its rarity and expense. Opium trade became more regular by the 17th century, when it was mixed with tobacco for smoking, and addiction was first recognized. Prior to the arrival of the tobacco pipe, opium was only taken orally; when smoked, the drug has a far more potent effect, and its addictive effect is greatly magnified. Opium prohibition in China began in 1729, yet was followed by nearly two centuries of increasing opium use. China had a positive balance sheet in trading with the British, which led to a decrease of the British silver stocks. Therefore, the British tried to encourage Chinese opium use to enhance their balance, and they delivered it from Indian provinces under British control. In India, its cultivation, as well as the manufacture and traffic to China, were subject to the British East India Company (BEIC), as a strict monopoly of the British government. There was an extensive and complicated system of BEIC agencies involved in the supervision and management of opium production and distribution in India. A massive destruction of opium by an emissary of the Chinese Daoguang Emperor in an attempt to stop opium imports, led to the First Opium War (1839–1842), in which Britain defeated China. After 1860, opium use continued to increase with widespread domestic production in China. By 1905, an estimated 25% of the male population were regular consumers of the drug. Recreational use of opium elsewhere in the world remained rare into late in the 19th century, as indicated by ambivalent reports of opium usage.

Global regulation of opium began with the stigmatization of Chinese immigrants and opium dens in San Francisco, California. This led rapidly to town ordinances in the 1870s and the formation of the International Opium Commission in 1909. During this period, the portrayal of opium in literature became squalid and violent. British opium trade was largely supplanted by domestic Chinese production. Purified morphine and heroin became widely available for injection and patent medicines containing opiates reached a peak in recreational use. Opium was prohibited in many countries during the early 20th century, leading to the modern pattern of opium production as a precursor for illegal recreational drugs or tightly regulated legal prescription drugs. Illicit opium production, now dominated by Afghanistan, was decimated in 2000, when production was banned by the Taliban, but has increased steadily since the fall of the Taliban in 2001 and over the course of the war in Afghanistan. Worldwide production in 2006 was 6610 metric tons—about one-fifth the level of production in 1906.

Bad Effects of Opiates. Effects on the body.

Opioids are most commonly used for pain relief and while some of the adverse effects seen with initial therapy are short term, some may last for longer durations, especially when therapy is continued over longer periods.

Some of the adverse effects of opioid use include: 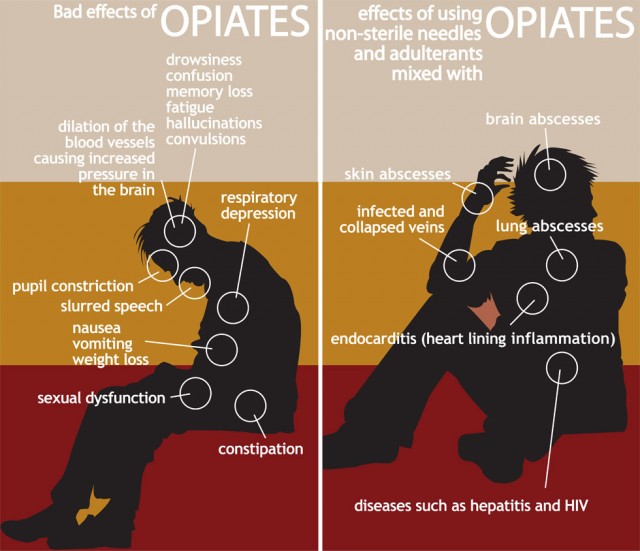 Bad Effects of Opiates. Effects on the body.