The terrible truth about impotence sounds improbable, but the problem of male impotence threatens every alcoholic person. A large portion of drinkers men do not even think about the fact that there may be problems. While these problems will not affect them. Usually impotence overtakes a man, aged 35-40, if not sooner. Many, until I was faced with a similar ailment, just do not want to accept and believe that such a thing was even possible. The majority of people listen to the advice of doctors, but believes that everything will cost. Moreover, at an early age alcohol contrary is stimulating, strengthens blood flow to the pelvic organs, and most importantly — increases the duration of sexual intercourse. However, the cumulative effect of alcohol is terrible.

In the first place begins to develop a conditioned reflex, which stimulates a man to drink before intercourse. However, over time, the potency begins to deteriorate, because alcohol inhibits sexual function and the nervous system. Man rarely wants to have sex, but to himself explains this fatigue, unattractiveness of his partner, stress, anything, not realizing that he already is on the verge of impotence.

Following the weakness of sexual function comes rapid ejaculation, even stronger decline, lethargy erection. These phenomena can be called mild impotence. Then (suddenly drinking men) there comes a time when an erection does not arise at all. Taking this fact for a misfire (happens!), he may not pay attention to the case, but similar situations begin to repeat more often until it becomes obvious.

The weakness begins to insinuate partner, a man falls self-esteem, and together with physiological and psychological impotence comes. 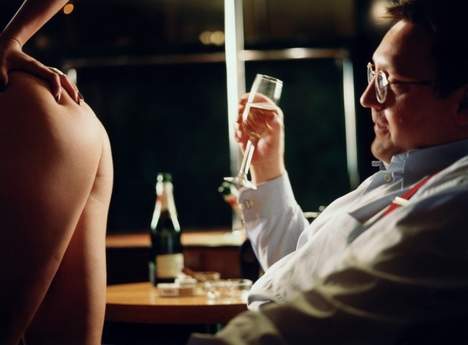 Why because alcohol comes impotence?

Prolonged use of alcoholic beverages, as shown by tests, leads to pathological changes in the prostate gland. Over time, the erectile tissues of the penis lose the ability to engorge with blood, and, as a result, becomes elastic, which leads to the devaluing of sexual intercourse. Because alcohol destroys the coordinated work of the nervous system, then drinker reduced sensitivity during sex. This, by the way, due to the duration of sexual intercourse during intoxication than men are so proud. In fact, the signals of excitation and inhibition simply untimely reach areas of the brain, and the person disoriented.

The sooner a man begins to drink, the faster becomes the failure, often by 25 years of his life, he becomes impotent. If a man prestressed to alcohol later Mature age (after 20-22 years), and in this case it sexual function fade, but is much more dangerous that it starts to deteriorate psychologically, when it excites more and more primitive and crude things that aren’t associated with thin and high sensations. With age (around 40 years) interest in sex completely disappears, it is due to the fact that simple stimuli are no longer attractive, and more subtle ways of self-excitation of the psyche is no longer able. In the end, sex becomes just boring, uninteresting, and this is the main cause of impotence, because after the reluctance is reducing the number sex and death sexual functions.

Some men believe that as a counterexample can lead people who drink alcohol, but “hold your own”. But, first, it is the exception to the rule, and, secondly, on the words of men tend to exaggerate their achievements and remain silent about problems. Statistics insists reverse: 50% of the patients on the second and even the first stage of alcoholism, there are systematic violations of erection or even complete impotence. In the first phase can help cleaning the body, but you have to understand that the best prevention of impotence is the maximum abstinence from alcohol.

Suffer from alcoholism and found signs of impotence? What to do?

In the first place not wait until the problem gets worse. The sooner you contact narcologists, the better and faster restore potency. Please note that medical treatment of impotence is possible, but only if the refusal of libations, which means that the disease should be treated only in the complex.

The effects of alcohol on the kidneys
Alcohol interferes with the development of the personality
Alcohol: Health Problems and Symptoms of use
Alcohol during menstruation
Long-Term Effects of Alcohol
Alcohol & Gender