Shingles commonly known as herpes zoster is caused in adults by the varicella zoster virus (HHV-3). The varicellla virus also causes chicken pox and can remain dormant in the body only reappearing at a later stage as shingles.

Shingles occurs more in patients over 60 years of age and occurs on one side of or a certain area on the body.

A rash appears and remains for between 2 to 3 days or for as long as three weeks. The Varicella zoster virus causes both chickenpox and herpes zoster (more commonly known as shingles). Varicella zoster can affect both children and adults. Similar symptoms are caused in each case.

Chickenpox is the most common type of childhood rashes characterized by the small, itchy, open sores spread on the skin of your body and head. This skin infection is contagious and can be contracted through coughing, direct contact and sneezing.

Herpes zoster is more commonly known as shingles. This is a painful viral skin rash with blisters in certain areas of the body. Shingles can be a complication of chickenpox as a late-effect (years after) when the dormant virus breaks out of nerve cells and causes a skin infection. Shingles is not particularly contagious and is prevalent in one in five people.

A virus called the Varicella Zoster virus (HHV-3) is one of eight herpes viruses that affect humans. This virus causes chickenpox and herpes zoster (shingles). Herpes zoster infects the skin and nerve cells along nerve fiber pathways causing multiple sores on the skin. Sores often form in a band or belt like pattern on one side of the body. Healing usually occurs in 2 – 4 weeks and scars may remain. Post herpetic neuralgia is a similar to shingles but pain or infection lasts for longer periods.

Mononucleosis- the kissing disease is a contagious infection transmitted through saliva and air-borne particles. Infants can contract the virus after birth. During childhood infections cause no symptoms. It is only during adolescence that symptoms are displayed. 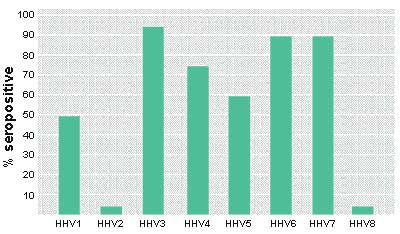 Levels of virus found in salvia

How can the Herpes virus be treated or prevented?

There is not much you can do to prevent yourself or your child from contracting the herpes zoster virus.
Immunization (a vaccine against this virus) is recommended to children, older adults and people with immune deficiencies. Vaccination is the best treatment and prevention method.

General overview of Herpes
The difference between Cold Sores and Herpes.
The Relationship, if there is any, between Herpes and Cancer
Symptoms of Penile Herpes
What are the factors that makes one more susceptible to Herpes?
What is herpes simplex?